How To Be Sinless

Here we go again, another theologian or philosopher perpetuating sin as a cause rather than sin as a symptom. Sin is a symptom of believing the wrong things about your self (Genesis 3:1-5). The snake gaslit Eve, telling her she won't die if she eats the fruit and she will be like God. I fully expect every single person who has ever read the Bible to agree that this is an accurate paraphrase.

The point of divergence is how that simple statement is interpreted and has been perpetuated for thousands of years. The most evil thing you can do to a person is to tell them to disbelieve in the way they were created because beliefs are their divinely created superpower. If you don't believe in yourself, there is nothing God can do for you. Believing the wrong things about one’s self causes one to feel, think, and act against their nature which instantaneously creates a trophic cascade of negative consequences that reverberates to this very day.

Don't believe me? Read Genesis 3:6-13. Immediately Adam and Eve felt naked and afraid. Afraid of their Creator! Adam blames Eve and Eve blames the snake for deceiving her. But look at the gaslighting: you won't die, and you'll be like God. The lie: you're not like God, so perform this simple action and you will be. This is identical: accept Jesus as your Savior and you'll be saved from sin, the power of sin.

Sin has power over me because a certain text written hundreds of years after Jesus was murdered for exposing the longest-running con? Nah, I'm good. In fact I am perfect the way I was created.

If you believe the wrong things about yourself — as Jewish religious authorities and the Church have perpetuated for thousands of years — you will believe the wrong things about absolutely everything else. The Bible does a great job of documenting how beliefs work. Those who believe (sow) in the invisible manifest (reap) on Earth as it is in heaven (invisible). Those who disbelieve (sow) in the invisible manifest (reap) misery by harming their selves and others.

Back in the Garden of Eden, the all-knowing God asks where Adam and Eve are. He couldn't see them because they hid themselves. They no longer felt free, they were literally naked and afraid, so they tried to cover their feelings. Adam explained it, and then God asks "Who told you that were naked?"

I don't have to tell you because they have been doing it for thousands of years. That anyone would believe the lie they continue to tell you is the greatest sin that one can commit against their fellow human being. You can go to almost any church in the world and experience the evil yourself.

What does it mean to be like God? It means that you believe in who you were created to be. You don't get wrapped up in the obedience trap where if you will just obey the 10 Commandments God will bless you. If you don't God will punish you.

Jesus was perfect because he believed in who he was created to be. He facilitated miracles. His fellow Rabbis facilitated misery. Our belief either creates miracles (Matt. 21:21) or misery (Matt. 9:1-8). Note that the Rabbis thought Jesus was committing blasphemy for suggestion the paralytic's sins were forgiven, and that Jesus told them that their thoughts were evil.

Then as now, the Rabbis believed the lie that sin is a moral failure. Stop sinning and all is well. As I explain here, this is a transactional belief—it is literally a source of income for the Rabbis and contemporary institutions that perpetuate this evil way of thinking! You cannot serve both God and Mammon.

Jesus always address the roots, the causes, never the fruits, the symptoms of misbeliefs. Jesus is telling the paralytic that his misbeliefs that led him to be paralyzed are forgiven, thus he is and always has been made whole. He asks the Rabbis if addressing the causes or the symptoms is easier, knowing full well that the Rabbis have done nothing but address symptoms because that's highly profitable. But addressing the causes is free. Believing anything that anyone says about you, especially religious leaders always results in misery!

The power of belief is just flat-out off the charts insane. But the constant drumbeat of transactional beliefs that have perpetuated the lie that you are not like God has led to even religious institutions fostering evil practices. Those are words directly from the Bible that they quote. That's how powerfully negative beliefs can be. You either serve God and help your fellow human address the causes, or you serve money by addressing the symptoms and call it all good (Matt. 9:1-8).

Beliefs are so powerful that just by merely believing one has received knee surgery has led to outcomes comparable to actual surgery. The famous knee surgeon did an experiment to see what part of his surgery practice was resulting in successful outcomes. Don't believe it? Then you will manifest that disbelief.

Moral behavior is a symptom of love. When Jesus said that the greatest command is to love one's neighbor as one's self, he was quoting Leviticus 19:9-18. But to hear Evangelicals tell it, only believers can love their neighbors in meaningful ways.

How you treat those that you judge to be the least amongst you in everyday interactions is the be all, end all.

Once I was like you. Like Eve, I believed I was not like God and I did everything I could to please Him. My father never told me he loved me, never hugged, always criticized me for not being good enough. I accepted Jesus into my life because someone told me that life would be better. I was happy in Church because it met my social needs and they accepted me not as Peter B, the insanely curious late teen, but only as a believer in Christ.

One day I’m in good graces, the next day I’m deaf, can’t walk, can’t talk, and can't read for several months. When I did regain my motor and intellectual functions a year later, a prominent Conservative handed me a note: “Peter, the reason you are deaf is because you didn’t have enough faith”.

Once I was like them. Today I am me. 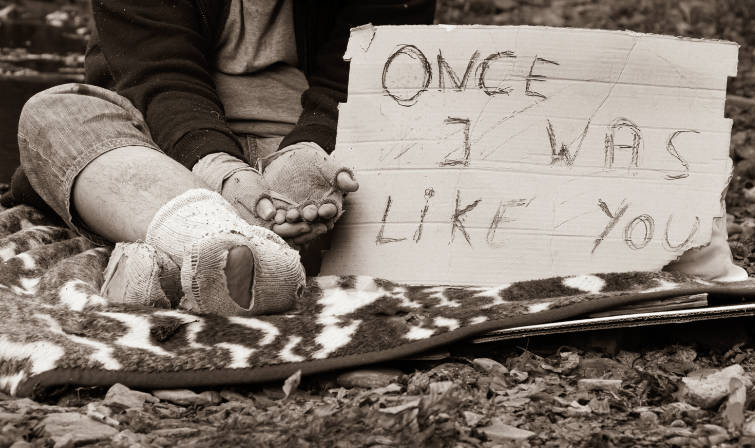